In this series of posts, we’re investigating micro-optimizations in C#. As previously mentioned, these may not be applicable to all; but it’s still fun looking at these concepts.

Let’s visit back the last post – Ref arguments. Ref arguments gave us the power of passing structs by value in an extremely efficient manner.

Mutability of a ref struct

Passing structs by ref brings a major disadvantage – the callee might mutate the value of the struct without the caller ever knowing. What if we need to pass structs in an efficient manner, whilst having peace of mind that the callee doesn’t mutate the struct?

Meet the in parameter modifier- C# 7.2

What does the in parameter modifier do? It allows us to pass the argument by reference and giving us the guarantee that the arguments cannot be modified by the callee. Excellent! Let’s run a quick test and make sure our performance is still comparable when passing by ref. Let’s have a struct with 2 properties – let’s have some work done using two different methods – passing by ref and passing by in.

All code can be viewed here – https://github.com/albertherd/csharpmopt2-in

Let’s see how they perform.

Wait a second – why is IncrementByIn 10x slower than IncrementByRef when we’re accessing 2 properties in the same struct? Let’s have a look at the generated IL.

Interesting! When we’ve called the method by ref, the resultant IL just loads the argument and calls the getter. When we’ve called the method by in, the resultant IL creates a copy of the struct before the getter is called. It seems that each time we’re referencing the property, C# is generating a copy of the object for us? We’re facing a by-design feature – a defensive copy.

Why do we encounter a defensive copy?

When calling the getter of our properties, the compiler doesn’t know if the getter mutates the object. Although this is a getter, it’s only by convention that changes aren’t made; there is no language construct that prevents us from changing values in our getter. The compiler must honor the in keyword and generate a defensive copy, just in case the getter modifies the struct.

In the end of the day, a getter is just syntactic sugar for a method. Of course, defensive copies will be generated if methods are called on the struct since the compiles can’t provide any guarantee that the method call won’t mutate the struct.

How do we get around this?

Here’s how it looks now

Let’s re-run our benchmarks and assess the performance.

Far better! Performance is now equal (within margin of error). Some closing thoughts about this:

Until the next one!

Since structs are value types, by default, the entire struct is copied over to the callee, irrelevant of the size of the struct. If the struct is big, this is typically a bottleneck since a copy must be created and passed for each call. C# provides a method of overriding this behavior by using the ref keyword. If an argument is marked as ref, a pointer to the struct will be passed rather than an actual copy!

Let’s see an example – lets consider a struct containing two doubles – a 16 byte struct. Let’s say we have two methods that increments one of the values for us (just to give the loop something to do and not get it optimised away).

One of them accepts a (copy of a) struct, increments its internal values and returns the copy back. This is passed by value, which is the default behavior for a struct.

The other method accepts a struct by ref and increments its internal values. There is no need to return the data back therefore no extra copies were needed. This is not the default behavior, so we’ll need to accompany it with the ref keyword.

The below is the source code in question – find the whole solution here: https://github.com/albertherd/csharpmopt1-ref

The below is the time taken for 1000000 runs – this was executed using .NET core 2.2.1 – benchmarks done using BenchmarkDotNet

We can see that running this in a tight loop, doing the work by ref, in this case, is 72% faster! To what can we attribute this performance change? Let’s have a look at what’s happening behind the scenes.

Doing the work by value

Doing the work by ref

What does this mean?

One can obviously note that doing the work by ref has significantly less work to do:

Therefore, doing the work by ref is pushing less data when a method call takes place (maximum of 8 bytes, irrespective of the struct size) and is avoiding two data copy instructions, since it does not need to push and pop the new value since there are no return values.

If you increase the size of the struct, the performance gains would be even bigger, as shown in the below graph. 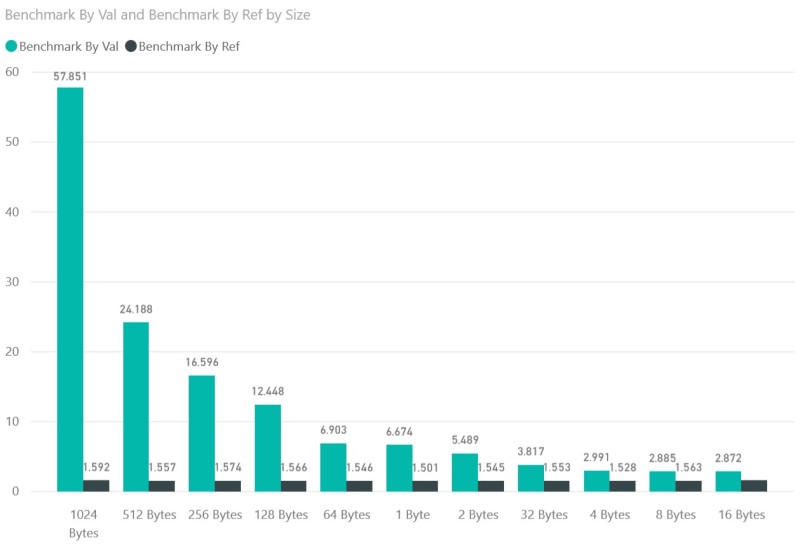 We can observe some useful information from this graph

What’s very interesting is that a 4 byte integer operates faster by value when compared to 1 byte and 2 byte integers!

I’m Albert Herd, a Software Developer based in Malta. My work revolves with the SharePoint Ecosystem. In my free time, I love learning about other technologies in the desktop and embedded environments and writing my thoughts on this blog.